6 steps for the correct mapping of a structure

6 steps for the correct mapping of a structure:

Using a drone to map a structure, so that it can be investigated in a reliable manner, would appear to be a simple task, given the vast array of HW and SW solutions that, at least on paper, appear to be effective.

Here are some simple rules that will help you to avoid making mistakes due to inexperience.

1. A thorough study of the object to be mapped, based on the final goals of the project

1.1. A thorough study of the object to be mapped is a key prerequisite to proper mapping with a UAS.

Any scenario (whether it be a territorial survey, inspection of a building or urban area, of an historic structure or a monument etc.) presents unique, distinctive features that need to be carefully analysed, so as to maximise the precision and effectiveness of the mapping and of the subsequent use of the data.

The fact is that not all mapping operations can be carried out a second time, due to any one of a variety of possible conditions, such as the weather or the environment, plant shut-downs etc..

1.2. The planning of the mapping is also of critical importance in all cases where flight constraints (i.e. operations in critical settings) place limits on the time and space available for flying, or when there are physical limitations affecting how photos and videos can be obtained (i.e. façades of buildings on narrow streets or in crowded squares).

1.3. Study of the ultimate objectives of the mapping (for purposes of design, surveying, comparison, study, monitoring etc.) is all the more important because it serves as the basis for determining how best to process the resulting data.

2. Choice of the drone best suited to the project, based on the sensor to be used: the importance of the inertia of the drone and the payload

2.1. The choice of the drone best suited to carrying out a mapping project is often given too little attention, in the belief that any UAS is capable of doing the job properly.

While there is no question that mapping operations covering extensive territories can be carried out using fixed-wing drones, doubts arise as to whether this approach should always be preferred when the performance of sensor transported is considered (the lens set-ups, the sensor’s capabilities, the megapixel capacity), seeing that the sensors on multi-rotors allow them to survey areas of noteworthy size as well, and without any loss in terms of the end result. In fact, ongoing regulatory and technological developments have made multi-rotor drones highly competitive, with respect to fixed-wing UAS, when it comes to mapping extensive areas, with the advantage (not to be underestimated) that they are the only craft capable of carrying out up-close mapping, thanks to their ability to hover and their capacity for highly precise movement.

2.2. Another important consideration is how the mix of “inertia of the UAS” and “gimbal performance” makes a critical contribution to the taking of photographs free of defects. On the one hand, the inertia generated by the mass of the UAS in movement puts up exceptional resistance to the instability caused by the wind, limiting the offsetting effort required of the motors to stabilise the craft at a given altitude.

In many cases, surveying work with multi-rotor drones calls for the craft to be up-close, in order to capture details, regardless of the performance level of the photo camera, which would otherwise allow the drone to remain at a distance, whereas up-close it enters the turbulence that arises in the proximity of the objects to be surveyed (vortexes along cylindrical or curved surfaces; currents rising along heated walls; the microclimate created between high objects with little distance between each other etc.). In addition to these effects, there is that of the wind blowing above the ground, which can vary with the season and the changes in the radiation from the Sun at different times of day. In such cases, there is little that can be done by the pilot (who has other things to worry about) or by the motors, no matter how many there are, to offset the destabilising effect, as the best stabiliser undoubtedly proves to be the intrinsic effect of the mass of the UAS flying through the fluidity of the air currents in which it is immersed.

2.3. The use of a gyro-stabilised gimbal supplements the inertia of the UAS. This high-performance component plays a key role in preventing the micro-motion effect while photographs are being taken under any conditions of light or camera setting, lending the mapping operation levels of speed and security of data collection that would otherwise be unattainable. The gimbal plays a key role, whether it is set in a given direction (as in the case of nadiral images) or taking photos while rotating on its axes, in which case the internal micro-vibrations (due to the rotation of the support arms) combine with the transverse rotary shifting caused by the movement of the UAS, with the overall effect having direct repercussions on the quality of the image.

2.4. The combined stabilising effect described above can be noted not only in still images, but in video recordings as well, where the “jello effect” is inversely proportionate to the quality of the recording.

2.5. If consideration is also given to operations in which a LIDAR system is mounted on a multi-rotor drone, then the question of the effect of the inertial mass of the UAS on the GPS positioning of the system while in flight is anything but a factor of secondary importance, fully reflecting the same concepts expressed above with regard to photogrammetric imaging.

3. Planning of optimal integration with the topographic support

3.1. The planning phase of the mapping must necessarily include planned integration with the topographical survey support for the geo-referencing of the final results, whether the system of coordinates being used is global or local. As such, the synergy between the UAS pilot, the gimbal assistant and the topographers turns out to be a vitally important element in identifying and planning the target position and the individual points that need to be identified to set the subsequent 3D model, making it possible to adjust the scale and limit distortions.

3.2. The phase of topographical integration is also of critical importance in setting the precision of the mapping to be carried out, with the further possibility of insetting control points for the ongoing assessment of the models obtained.

3.3. In addition to the above, when it comes to improving the accuracy of the data obtained over areas where it is often not possible to gather topographical information, a GPS GNSS RTK can be used aboard the drone.

4. Attentive selection of the methodologies used to carry out the mapping, based on: subject, exposure, lighting, detail, distance from the object etc.

4.1. One factor that should be kept in mind both during the planning of the mapping and while it is being performed are the lighting conditions of the subjects to be photographed. 3D reconstructions are based on algorithms that correlate pixels, in order to assign spatial coordinates to the points contained in a mathematical model. Chromatic hues serve a fundamental role in identifying matching points of different photos, meaning that the overlaying of the different shots is not enough, but must be supplemented by the continuity of exposure and lighting of the subjects, as well as the distance from which they are shot and their details.

4.2. The procedures for mapping cannot be standardised, but it is possible to draw up a few basic guidelines:

- each object or section to be reconstructed (including portions that are hidden or cut off) must be visible in at least two or more photographs.

- a number of sets of photographs are needed, so as to make possible medium-range overlay of the photos, whether they were taken up-close or from a considerable distance.

5. Redundancy of the data obtained for subsequent selection of the best images and the overlap

5.1. Regardless of the subject being mapped, it is always a good idea to carry out a redundant mapping operation, obtaining far more images than would normally be considered necessary, based on current accepted practice, seeing that subsequent conditions or constraints of the 3D reconstruction might call for the points photographed to be supplemented, or it could occur that planning considerations which arise following the mapping make necessary visuals and details that were not originally considered relevant, and so their importance was underestimated during the collection of the data.

5.2. The above redundancy can be achieved with the aid of a UAS outfitted with a planning software designed for use in aerial photogrammetric imaging and mapping. Software is available with features optimised to determine ground parameters in advance, such as the required data precision and accuracy, based on the type of sensor being used, or the overlay of the photos, in order to create flight plans that take into account these and other parameters.

5.3. The redundancy of the data obtained also serves as a precaution against variations in conditions of light and exposure that can occur during the mapping, with the result that certain sets of acquired data can be used rather than others, in order to obtain a complete, detailed 3D model.

6. The use of professional software of proven reliability to manage data and generate output.

Perfect interoperability, in order to optimise performance of the hardware employed, relegating open-source software to the role of a comparative tool used to detect any deformities.

6.1. In our opinion, the use of professional software is of fundamental importance in the processing of the data obtained, both during 3D reconstruction and when handling meshes and point clouds.

While Open Source constitutes a formidable tool when it comes to software development and sharing, technical operations call for the reliability and certainty of results corroborated by a host of case histories worldwide, qualities that prove to be of fundamental importance in completing assigned work and delivering incontestable results to clients. This outcome is possible only through the use of licensed proprietary software whose end goals, being tied to business operations, are achievable solely on the strength of attaining secure, reliable results.

6.2. The use of proprietary software programs that are compatible with each other, guaranteeing perfect interoperability, also makes possible the production and exchange of documents that are fully compatible, without the loss of any information due to transformations or exportations, and with unequalled lightness of data-loading, a factor of no secondary importance when it comes to optimising the hardware available for use.

This brief users’ guide highlights only some of the key procedures in achieving optimal mapping of a structure.

In order to carry out state-of-the-art operations, it is best to possess specific skills and know-how, in addition to the tools best suited to the task.

ITALDRON offers professional training courses on aerial operations and the use of applications, combining business consulting with the selection of the right combination of tools, in order to satisfy practical operating demands. It also provides professional DRONE service through the operators of its SERVICE NETWORK.

For more information, write to:  info@italdron.com 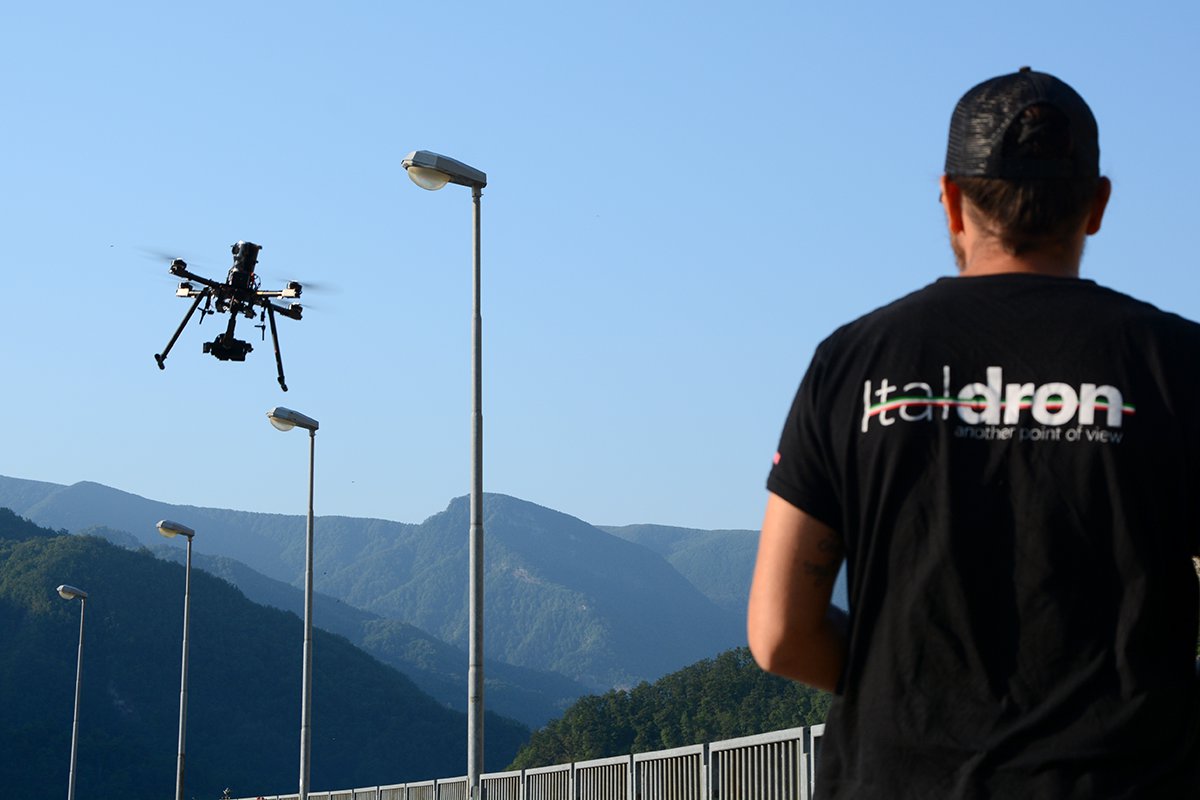 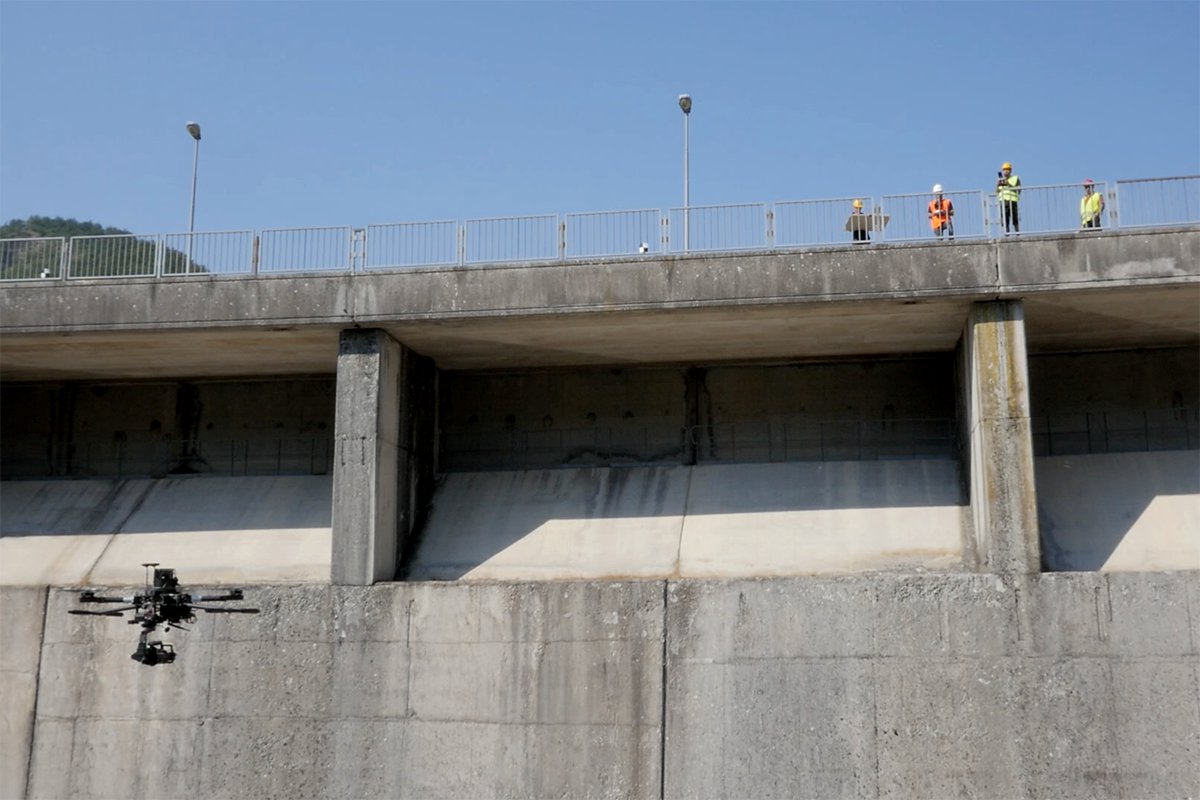 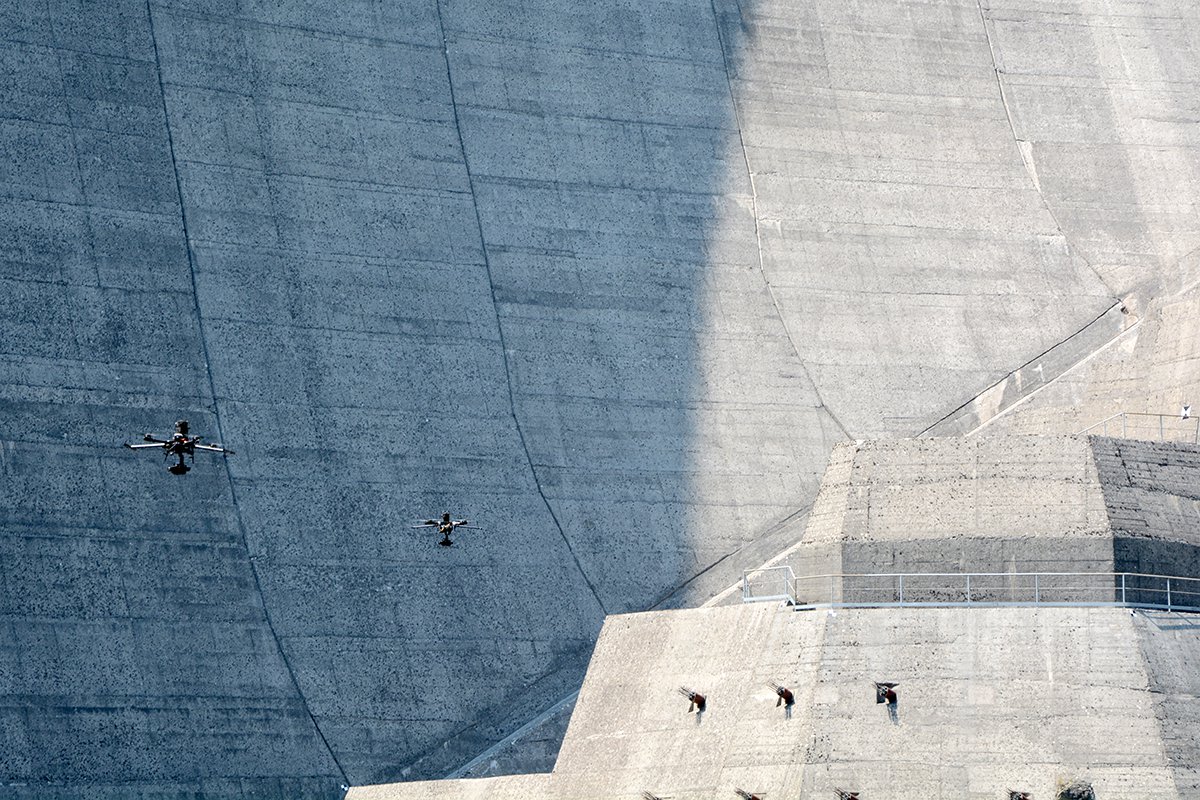 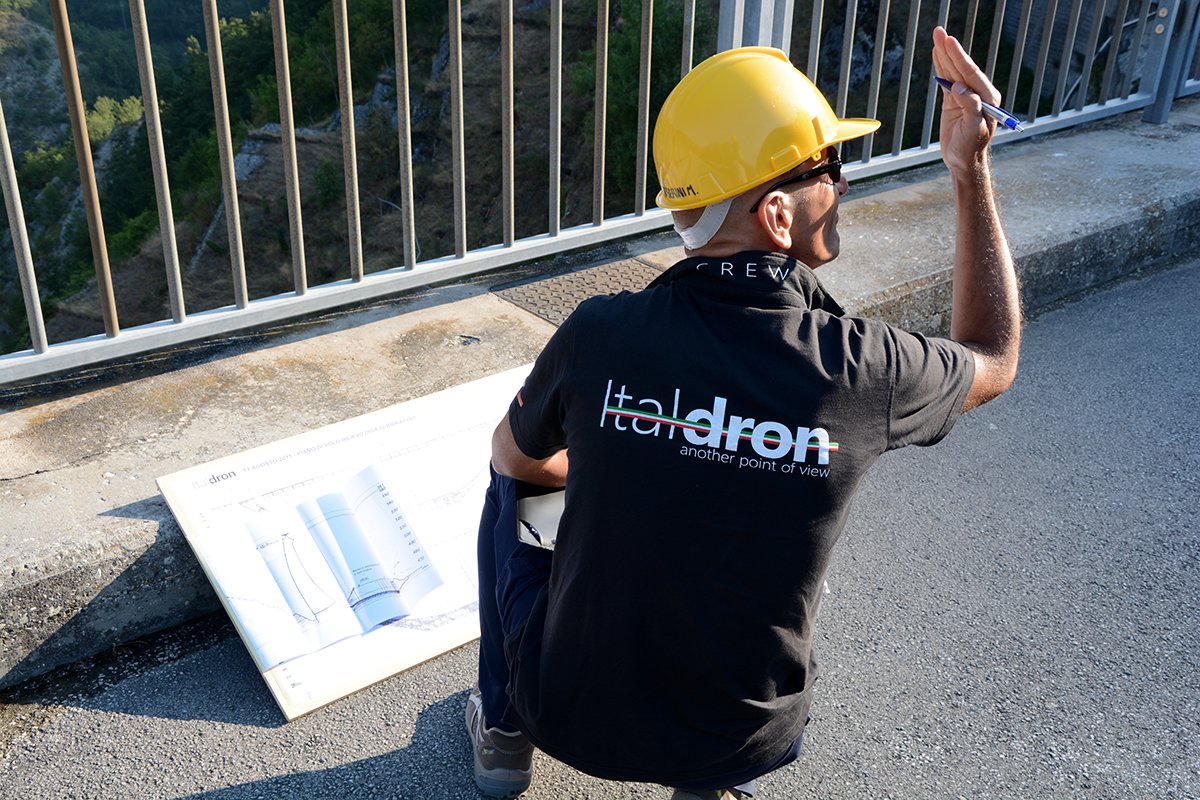 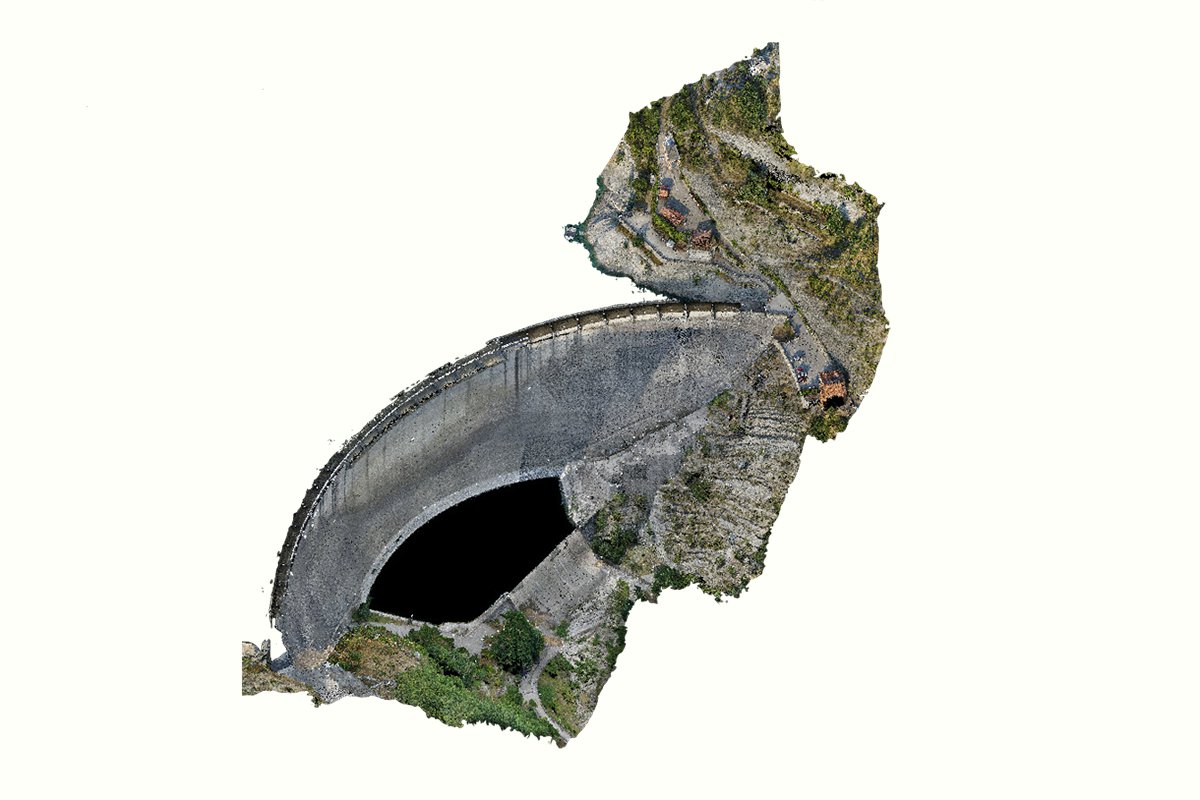